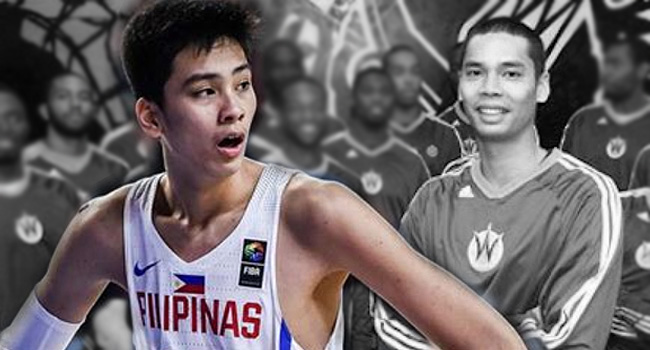 Japeth Aguilar, Philippine national basketball team mainstay and the first Filipino born and raised in the Philippines drafted by the NBA D-League, offers some advice to Kai Sotto.

Aguilar was the 109th overall draft pick of the 2012 NBA D-League draft and was drafted 13th in the seventh round by the Santa Cruz Warriors - the affiliate of the Golden State Warriors. After surviving two cuts, Aguilar was cut from the final roster.

High school basketball prospect 7-foot-2 Kai Sotto on Monday announced he is leaving the country to pursue his NBA dream. Kai will undergo training in the U.S. for two-month training in Atlanta and will also be Sotto's preparation for the FIBA World U-19 tournament in Greece.

According to SPIN.ph, the US training will focus on strengthening as the 16-year old aims to bulk up before embarking for the rest of the trip. Sotto’s father Ervin Sotto said the rest of the itinerary, including a long-planned stint in Europe, has yet to be finalized.

All three failed to make it to the NBA. All three are now rooting for Kai Sotto to succeed 🇵🇭🙏 By @dolphtrythis https://t.co/Oq32odU6Uh via @SpinPh

"The level of competition is definitely higher with people around his size and athletic ability and they will all have the same goal. Kai will really have to work hard and put in the hours,"

"Three hours on court, three hours of weights and conditioning, iba yung pagod doon, iba yung exhaustion na mararanasan niya sa level of training doon. It will be physically taxing as well as emotionally draining. It’s going to be a journey for him from being a boy to becoming a man."

"It’s definitely going to be difficult and competitive, but as long as he works his butt off and surrounds himself with the right people, I think he will make it."

"At the end of the day, he has the support of every Filipino coupled with his desire to achieve his goal. He already has the height, natural talent and all the potential, but with advanced and world-class training, it brings him closer to the possibility of getting into the NBA." Aguilar told Randolph B. Leongson of SPIN.ph.