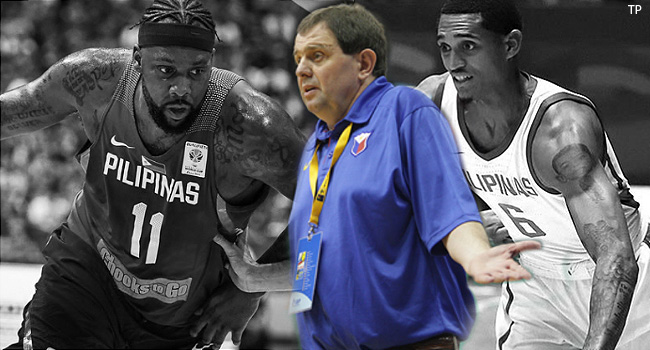 Gilas Pilipinas, currently 31st in the FIBA world rankings, was grouped together with world no. 4 Serbia, world no. 13 Italy and world no. 39 Angola in Group D in the elimination round of the FIBA World Cup.

According to PBA chairman Ricky Vargas, "SBP is quietly working with FIBA, so we're seeing to it that if we can get Jordan Clarkson for the World Cup [as a local player], that will be fantastic."

“With Clarkson, Gilas will be very strong,”

“Without Clarkson, it still has a chance but not that big. With Clarkson, the chances are 40 percent but without, 25 percent. If Italy will come without some of their star players like (Danilo) Gallinari, (Marco) Bellineli, (Gigi) Diatome and (Nicolo) Melli, the chances are bigger because the players from domestic championships don’t have a main role in their clubs with American imports dominating. The Italian coach (Romeo) Sacchetti is also a weak point.”

“To beat Italy, you need a great performance and Italy to have one of those days when not too much is going right,”

“Now, Angola is not that strong and I will give more chances to Gilas.”

“Djordjevic was a big-time player and I was the assistant coach when he played for the national team,”

“He was very smart on the court, making tough decisions. He wasn’t too successful coaching clubs like Panathinaikos or Bayern but with the Serbian national team, he’s done great work and I think he’s the right person for the job.”

“Even Kobe (Bryant) warned the US team how strong Serbia is,”

“Right now, Serbia has 12 players at the highest level in the NBA and EuroLeague. It has lots of talent. Some of the players have improved a lot like Nikola Milutinov, Vasa Micic and Marko Guduric.”

“I think he wants to play but the problem is Denver. Jokic is the Nuggets’ main player and last year, signed a $150 Million, five-year contract extension. I think Denver will recommend him not to play. His body is still not strong enough and he could use the summer to work on getting stronger. The other day, Jokic was quoted as saying it’s too early to make a final decision on whether or not he’ll play in the World Cup and his focus is just the NBA playoffs.” Toroman said in an interview with Joaquin Henson of The Philippine Star.